"Water" is the definitely the word this month, and is coincidentally the main topic in this month's Special Edition of National Geographic Magazine. There's a free download of that issue is available online until April 2nd.

Message in a bottle...

And lastly, PNY memory cards and USB drives set sail on David de Rothschild's Plastiki expedition. On, March 20th, 2010 a 60-foot catamaran made from 12,500 reclaimed bottles and srPET a fully recyclable plastic, raised sail from Sausalito, California. Environmentalist and adventurer David de Rothschild (National Geographic Emerging Explorer Class of 2007) and his five-person crew are headed on a 100-day ocean journey across the Pacific to Sydney, Australia. This journey will take de Rothschild and his team more than 11,000 nautical miles across the ocean in an effort to draw attention to the health of our oceans. 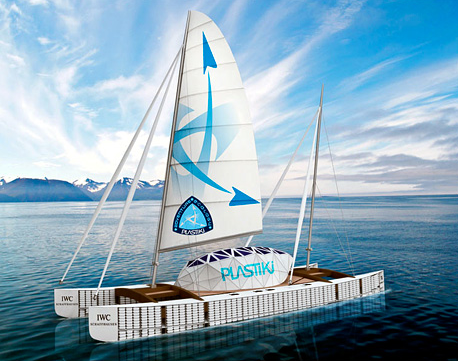 These are the tenets of the Plastiki's Philosophy and the purpose of their mission:

• It's about recognizing that waste is fundamentally a design flaw (it does not appear in nature)
• It's about re-thinking waste as a resource
• It's about cyclical 'cradle-to-cradle' philosophies rather than linear thinking when it comes to how we design our world
• It's about a better understanding of the lifecycle's and materials used in our everyday lives
• It's about being curious and open, being prepared to let go of assumptions in order to undertake a new ‘Planet 2.0' way of thinking and acting
• It's about acknowledging that we don't have all the answers and that nobody is as smart as everybody
• It's about being collaborative and curious so to engage multiple perspectives, skills, opinions and organizations
• It's about constantly learning, unlearning and re-learning
• It's about re-integrating back into the web of life by recognizing and reducing our human fingerprints on the natural world
• It's about moving on from just articulating the problems and inspiring action of the solutions
• It's about encouraging the world to reduce, reuse, recycle and rethink more of the planets natural resources
• It's about delivering a spectacular global "Message in a Bottle".

WHY?
• It is estimated that almost all of the marine pollution in the world is comprised of plastic materials. The average proportion varied between 60% and 80% of total marine pollution.

• In many regions in the northern and southern garbage gyres, plastic materials constitute as much as 90 to 95% of the total amount of marine debris.

• Scientists estimate that every year at least 1 million seabirds and 100,000 marine mammals and sea turtles die when become entangled in plastic pollution or ingest it.

PNY is proud to support efforts such as the Plastiki that can help raise awareness on issues confronting the planet, and work toward minimizing our environmental footprint.

To stay up to date on the Plastiki, please click here.