On May 6th, NVIDIA announced the GeForce GTX 1080, the first GPU to feature its new Pascal architecture.  Pascal boasts new improvements in performance, offering up to twice the performance in virutal reality as experienced with the GTX Titan. 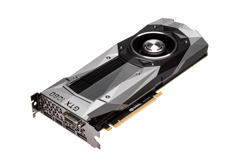 The enhancements made effect memory bandwidth and power efficiency, as well.  Pascal is 3x more power efficient than the Maxwell Archtecture.  The 1080 GPU is designed for the 16nm FinFET process, delivering dramatic increases in performance and efficiency because the transistors can be packed together more densely.

"The PC is the world's favorite gaming platform, and our new Pascal GPU architecture will take it to new heights," said Jeff Fisher, senior vice president of NVIDIA's PC business. "Our first Pascal gaming GPU, the GeForce GTX 1080, enables incredible realism in gaming and deeply immersive VR experiences, with dramatically improved performance and efficiency. It's the most powerful gaming GPU ever built, and some of our finest work."1