VR is still a hot topic at SIGGRAPH, from the VR Village to the numerous booths demonstrating various VR solutions, where you could fight samurai warriors or visualize an entire Bombardier -Talent 2- heavy rail passenger train. This made the PREVAILPRO P4000, powered by the VR-Ready Quadro P4000 mobile GPU an exciting addition to PNY’s demonstrations. Hooking up the HTC VIVE VR headset has never been simpler, and the ability to take this VR system into the field or to provide architectural walk throughs at a client’s facility has never been easier.

For non-mobile systems, the VR rig powered by the Quadro P6000 also received a lot of attention, with attendees mesmerized by the virtual landscape and floating butterflies presented by the Theia interactive demo. VR creation and consumption requires the highest-performance graphics to deliver the smoothest, most immersive and life-like VR experiences. This system demonstrated how the P6000 with 24 GB GDDR5X GPU memory and 3840 CUDA Cores delivers the level of performance and capabilities essential for the best VR experiences across professional applications.

Dramatic show stopping footage at the booth came from Zero VFX, renowned for their complex visual effects for feature films such as Ghostbusters and Patriots Day. Zero VFX configured the 2x Quadro GP100 + NVLink system that was showcasing their work. This enabled them to try the system out in their VFX workflow and experience the production rendering acceleration achieved using the massive compute and visualization power of the GP100.

“Zero VFX was so impressed with the speedup offered by the 2x Quadro GP100 + NVLink system that they are considering purchasing several to complement their current workstation standard, the Quadro P4000.  Although they didn’t give us specific performance numbers Zero VFX indicated that these boards would be cost effective due to the extreme performance offered and the ability to explore alternative creative approaches to best meet client needs and expectations.”

A rackmount case featured a VCA Certified Rendering System.  This beast hosts eight Quadro P6000 GPUs. A much smaller client system powered by a Quadro P1000 loaded with Autodesk Design Suites and SOLIDWORKS Visualize Professional   demonstrated how you can access the immense power of the VCA system to enable interactive physically based rendering by manipulating a sophisticated motorcycle model in real-time. Thanks to our VCA Certified Partners GPL (VCA)  and RAVE (VCA Client) for supplying systems.

Visit the SIGGRAPH 2017 wrap up page for more details. 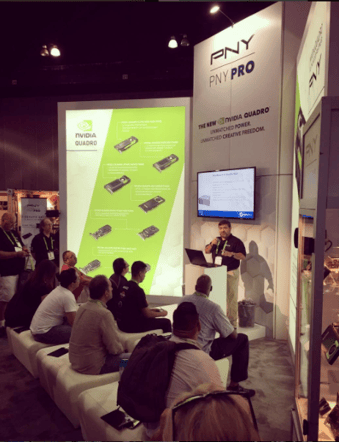 SIGGRAPH is the world’s largest, most influential annual conference and exhibition in computer graphics and interactive techniques.

PNY PRO had a whole new look this year at SIGGRAPH 2017, reflecting our commitment to professional and quality products. The launch of PREVAILPRO P4000 and P3000 mobile workstations, caused much excitement on the booth and packed the presentation theater.