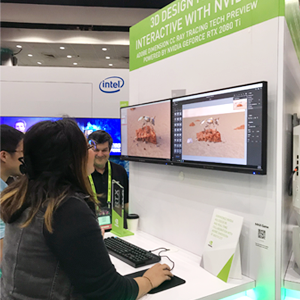 At NVIDIA’s Creative Experts Bar, some of the top design professionals in the industry displayed their talents and provided insight into their Adobe workflows. These pros covered everything from VFX and 360 VR video production in Adobe Premiere to photo editing in Photoshop and Lightroom. These Adobe application demos brought a lot of eager digital content creators to the booth!

Paint your Next Van Gogh with NVIDIA RTX Technology

Perhaps the most popular attraction at the booth was NVIDIA’s “Paint your next Van Gogh” with an AI assisted Sketch demo. Powered by the GeForce RTX 2080, attendee drawings and sketches were turned into beautiful works of art by a DNN trained with Van Goghs distinctive style of painting. With the help of a Wacom tablet and the GeForce RTX 2080, the DNN was able to Transform sketches or drawings into convincing Van Gogh-like works of art.

Thank you all for stopping by the booth and we look forward to seeing you at the next Adobe MAX!