This blog gives you a deep dive inside the A100 GPU, and describes important new features of NVIDIA Ampere architecture GPUs.

NVIDIA GPUs are the leading computational engines powering the AI revolution, providing tremendous speedups for AI training and inference workloads. In addition, NVIDIA GPUs accelerate many types of HPC and data analytics applications and systems, allowing you to effectively analyze, visualize, and turn data into insights. The NVIDIA accelerated computing platforms are central to many of the world’s most important and fastest-growing industries.

Overview of the NVIDIA A100 Tensor Core GPU

The NVIDIA A100 Tensor Core GPU is based on the new NVIDIA Ampere GPU architecture, and builds upon the capabilities of the prior NVIDIA Tesla V100 and V100S GPUs. It adds many new features and delivers significantly faster performance for HPC, AI, and data analytics workloads. 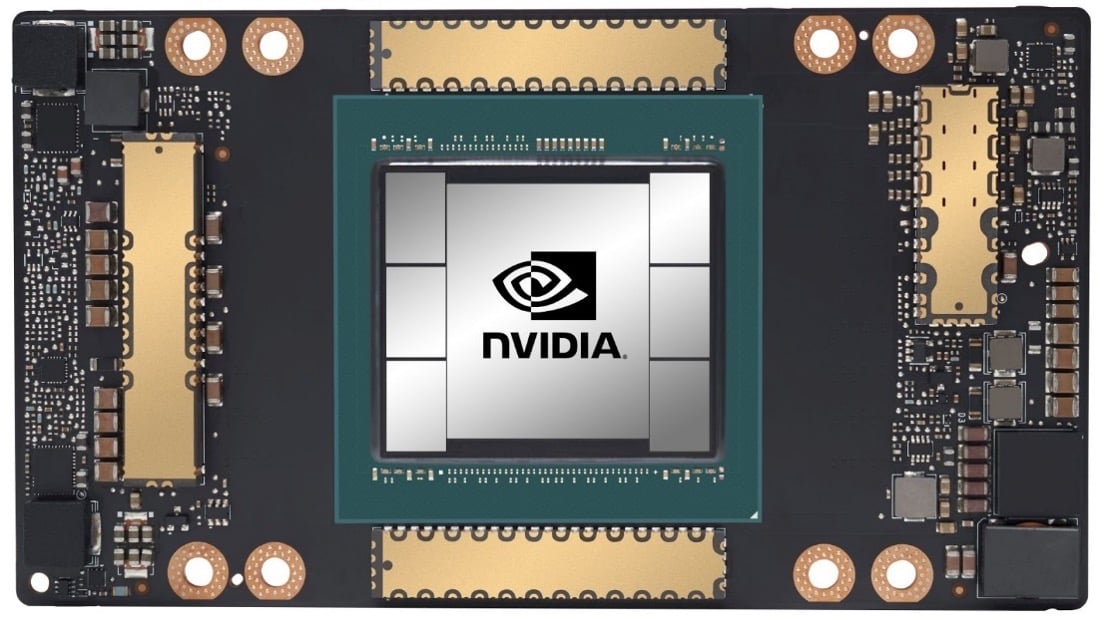 The A100 GPU includes a revolutionary new Multi-Instance GPU (MIG) virtualization and GPU partitioning capability that is particularly beneficial to cloud service providers (CSPs). When configured for MIG operation, the A100 permits CSPs to improve the utilization rates of their GPU servers, delivering up to 7x more GPU Instances for no additional cost. Robust fault isolation allows them to partition a single A100 GPU safely and securely.

A100 adds a powerful new third-generation Tensor Core that boosts throughput over V100 or V100S while adding comprehensive support for DL and HPC data types, together with a new Sparsity feature that delivers a further doubling of throughput.

The NVIDIA A100 GPU is architected to not only accelerate large complex workloads, but also efficiently accelerate many smaller workloads. A100 enables building data centers that can accommodate unpredictable workload demand, while providing fine-grained workload provisioning, higher GPU utilization, and improved TCO.

The NVIDIA A100 GPU delivers exceptional speedups over V100 or V100S for AI training and inference workloads.

The new streaming multiprocessor (SM) in the NVIDIA Ampere architecture-based A100 Tensor Core GPU significantly increases performance, builds upon features introduced in both the Volta and Turing SM architectures, and adds many new capabilities.

The A100 third-generation Tensor Cores enhance operand sharing and improve efficiency, and add powerful new data types, including the following:

This table provides key performance specifications for the NVIDIA A100 Tensor Core GPU:

1Peak rates are based on the GPU boost clock. 2Effective TFLOPS/TOPS using the new Sparsity feature.

The new Sparsity support in A100 Tensor Cores can exploit fine-grained structured sparsity in DL networks to double the throughput of Tensor Core operations.

The larger and faster L1 cache and shared memory unit in A100 provides 1.5x the aggregate capacity per SM compared to V100 or V100S (192 KB vs. 128 KB per SM) to deliver additional acceleration for many HPC and AI workloads.

To feed its massive computational throughput, the NVIDIA A100 GPU has 40 GB of high-speed HBM2e memory with a class-leading 1555 GB/sec of memory bandwidth—a 73% increase compared to Tesla V100 or V100S. In addition, the A100 GPU has significantly more on-chip memory including a 40 MB Level 2 (L2) cache—nearly 7x larger than V100 or V100S—to maximize compute performance. With a new partitioned crossbar structure, the A100 L2 cache provides 2.3x the L2 cache read bandwidth of V100 or V100S.

To optimize capacity utilization, the NVIDIA Ampere architecture provides L2 cache residency controls for you to manage data to keep or evict from the cache. A100 also adds Compute Data Compression to deliver up to an additional 4x improvement in DRAM bandwidth and L2 bandwidth, and up to 2x improvement in L2 capacity.

The new Multi-Instance GPU (MIG) feature allows the A100 Tensor Core GPU to be securely partitioned into as many as seven separate GPU Instances for CUDA applications, providing multiple users with separate GPU resources to accelerate their applications.

With MIG, each instance’s processors have separate and isolated paths through the entire memory system. The on-chip crossbar ports, L2 cache banks, memory controllers, and DRAM address busses are all assigned uniquely to an individual instance. This ensures that an individual user’s workload can run with predictable throughput and latency, with the same L2 cache allocation and DRAM bandwidth, even if other tasks are thrashing their own caches or saturating their DRAM interfaces.

MIG increases GPU hardware utilization while providing a defined QoS and isolation between different clients, such as VMs, containers, and processes. MIG is especially beneficial for CSPs who have multi-tenant use cases. It ensures that one client cannot impact the work or scheduling of other clients, in addition to providing enhanced security and allowing GPU utilization guarantees for customers.

The Magnum IO API integrates computing, networking, file systems, and storage to maximize I/O performance for multi-GPU, multi-node accelerated systems. It interfaces with CUDA-X libraries to accelerate I/O across a broad range of workloads, from AI and data analytics to visualization.

The A100 GPU supports PCI Express Gen 4 (PCIe Gen 4), which doubles the bandwidth of PCIe 3.0/3.1 by providing 31.5 GB/sec vs. 15.75 GB/sec for x16 connections. The faster speed is especially beneficial for A100 GPUs connecting to PCIe 4.0-capable CPUs, and to support fast network interfaces, such as 200 Gbit/sec InfiniBand.

The performance needs of HPC applications are growing rapidly. Many applications from a wide range of scientific and research disciplines rely on double precision (FP64) computations.

To meet the rapidly growing compute needs of HPC computing, the A100 GPU supports Tensor operations that accelerate IEEE-compliant FP64 computations, delivering up to 2.5x the FP64 performance of the NVIDIA Tesla V100 or V100S GPUs.

With support for these new formats, the A100 Tensor Cores can be used to accelerate HPC workloads, iterative solvers, and various new AI algorithms.

With the A100 GPU, NVIDIA introduces fine-grained structured sparsity, a novel approach that doubles compute throughput for deep neural networks.

Sparsity is possible in deep learning because the importance of individual weights evolves during the learning process, and by the end of network training, only a subset of weights have acquired a meaningful purpose in determining the learned output. The remaining weights are no longer needed.

Fine grained structured sparsity imposes a constraint on the allowed sparsity pattern, making it more efficient for hardware to do the necessary alignment of input operands. Because deep learning networks are able to adapt weights during the training process based on training feedback, NVIDIA engineers have found in general that the structure constraint does not impact the accuracy of the trained network for inferencing. This enables inferencing acceleration with sparsity.

Many applications have inner loops that perform pointer arithmetic (integer memory address calculations) combined with floating-point computations that benefit from simultaneous execution of FP32 and INT32 instructions. Each iteration of a pipelined loop can update addresses (INT32 pointer arithmetic) and load data for the next iteration while simultaneously processing the current iteration in FP32.

Because the A100 Tensor Core GPU is designed to be installed in high-performance servers and data center racks to power AI and HPC compute workloads, it does not include display connectors, NVIDIA RT Cores for ray tracing acceleration, or an NVENC encoder.

The NVIDIA A100 Tensor Core GPU delivers the next giant leap in NVIDIA’s accelerated data center platform, providing unmatched acceleration at every scale and enabling these innovators to do their life’s work in their lifetime. A100 powers numerous application areas including HPC, genomics, 5G, rendering, deep learning, data analytics, data science, and robotics.

Advancing the most important HPC and AI applications today—personalized medicine, conversational AI, and deep recommender systems—requires researchers, developers, and IT professionals to go big. A100 powers the NVIDIA data center platform that includes Mellanox HDR InfiniBand, NVSwitch, and the Magnum IO SDK for scaling up. This integrated suite of technologies efficiently scales to tens of thousands of GPUs to train the most complex AI networks at unprecedented speed.

The new MIG feature of the A100 GPU can partition each A100 into as many as seven GPU accelerators for optimal utilization, effectively improving GPU resource utilization and GPU access to more users and GPU-accelerated applications. With the A100 versatility, infrastructure managers can maximize the utility of every GPU in their data center to meet different-sized performance needs, from the smallest job to the biggest multi-node workload.

Make sure you register for NVIDIA GTC 21. This industry renowned event connects you with experts from NVIDIA to learn about the latest breakthroughs in AI, data center, accelerated computing, healthcare, intelligent networking, virtual reality, applications development and more. Attendance is free. Register today and enter for your chance to win a $25 Amazon gift card! Learn More: www.pny.com/gtc