Unlock the next generation of revolutionary designs, scientific breakthroughs, and immersive entertainment with the NVIDIA RTX A6000, the world’s most powerful visual computing GPU for desktop workstations. With cutting-edge performance and features, the RTX A6000 lets you work at the speed of inspiration, to tackle the urgent needs of today and meet the rapidly evolving, compute- and AI-intensive tasks of tomorrow. Here are some NVIDIA RTX A6000 features that offer exceptional performance by design:

With up to 2x the throughput over the previous generation and the ability to concurrently run ray tracing with either shading or denoising capabilities, second-generation RT Cores deliver massive speedups for workloads like photorealistic rendering of entertainment content, architectural design evaluations, and virtual prototyping of product designs. This technology also speeds up the rendering of ray-traced motion blur for faster results with greater visual accuracy.

Ultra-fast GDDR6 memory, scalable up to 96 GB with NVLink, gives data scientists, engineers, and creative professionals the large memory necessary to work with massive datasets and workloads like data science and simulation.

Featuring a dual-slot, power-efficient design, the RTX A6000 is up to 2x more power efficient than Turing GPUs and crafted to fit into a wide range of workstations or server enclosures that support actively cooled GPUs.

[1] Virtualization support for the RTX A6000 GPU will be available in an upcoming NVIDIA virtual GPU (vGPU) release.

The NVIDIA RTX A6000 will be available for shipment in December. Please contact PNY for updates and for additional technical specifications and benchmarking information, which is anticipated by mid-November.

Touching on everything from NVIDIA Omniverse to the metaverse, AI drug discovery (antivirals) to robotics for anyone, to major AI initiatives with Microsoft and American Express, Huang’s message was compelling: AI is changing everything, putting NVIDIA at the nexus of changes that will touch every aspect of modern life.

Virtualization support for the RTX A6000 GPU will be available in an upcoming NVIDIA virtual GPU (vGPU) release.

PNY delivered an on-demand session titled “NVIDIA RTX Server – High Performance Computing in the Data Center” (A22430) with a focus on GPU virtualization, rendering, AI, and CAE. If you registered for GTC, you can view this recording on-demand.

Welcome to the Omniverse

Bringing together NVIDIA breakthroughs in graphics, simulation and AI, NVIDIA Omniverse is an RTX-based simulation, collaboration and rendering platform for 3D workflows. Omniverse users can collaborate on their 3D workflows live between applications without tedious and time-consuming imports and exports, and then render them with incredible fidelity using NVIDIA RTX. Sign up starting this fall for the open beta, which will run on the full range of NVIDIA RTX hardware – from NVIDIA Studio laptops to RTX-powered workstations and servers. 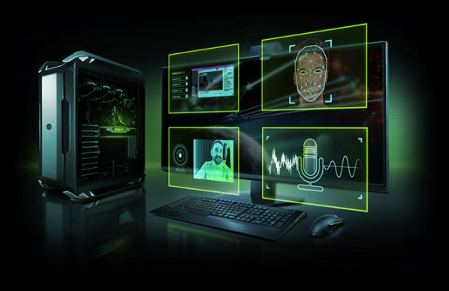 GTC 2020: A Cornucopia of Exciting Announcements

NVIDIA made many other significant and industry-defining announcements during GTC. Here are some highlights:

Focused on AI drug discovery, particularly the discovery of antiviral drug candidates, NVIDIA is equipping researchers around the globe with the power of AI to quickly screen, identify and develop new drugs. An NVIDIA DGX A100 SuperPOD-based supercomputer, Cambridge-1, is being built as part of this effort and NVIDIA is also teaming with GSK (GlaxoSmithKline) to build the world’s first AI in-silico drug discovery lab.

NVIDIA and Microsoft Partner on AI

Microsoft is adopting NVIDIA AI to create Microsoft Office smart extensions that will enable future versions of its Office suite to transform from a set of tools to a proactive assistant.

NVIDIA is teaming with American Express to utilize NVIDIA AI-based tools to identify suspicious transactions with an eye towards fraud and cybercrime prevention. In an increasingly digital economy, where your wallet is just an extension of bits on a bank’s IT system, this is a clear example of AI for the public good.

The NVIDIA EGX Edge AI platform focuses on AI inferencing at the point of activity, essentially acting as an intelligent ‘pre-processor’ before sending AI-generated results to the data center or the cloud. More information on the full scope of solutions and product offerings the EGX platform encompasses will be made available later this year.

By placing essential NVIDIA RTX GPU resources in the data center, and offering full NVIDIA RTX features and benefits via NVIDIA Virtual Data Center Workstation or Virtual Compute Server software, creative, design, healthcare, media and entertainment, and scientific and technical professionals (to name a few) are reinventing work for those working from home (WFH). PNY is proud to be a part of this initiative to enable better WFH experiences, enable more people to WFH, and utilize AI and collaboration enhanced virtual tools to restore productivity.

This blog is a mere appetizer next to the vast banquet of introductions, announcements, and industry changing technologies announced at GTC. To learn more visit NVIDIA’s website since, as a virtual event, GTC in its entirety will be available online. Check NVIDIA’s website to stay in touch with the implications and reverberations of GTC throughout the balance of 2020.

At PNY Passion for NVIDIA Solutions Never Sleeps
To learn more about the NVIDIA Ampere Architecture or the NVIDIA RTX A6000 visit PNY’s website or email gony@pny.com.