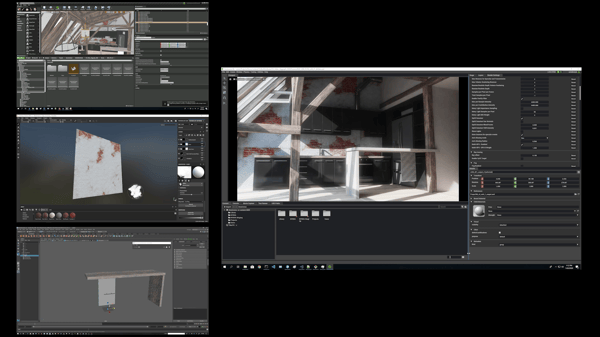 Omniverse Connect libraries are distributed as plugins that enable client applications to connect to Nucleus and to publish and subscribe to individual assets and full worlds.

With any needed synchronization in place, a DCC plugin will use the Omniverse Connect libraries to apply externally received updates and publish internally generated changes as necessary.

As the application makes changes to its USD representation of the scene, Omniverse Connect keeps track of all the local changes since the last publishing event. When requested by the application, the Omniverse Connect libraries will construct a file-by-file set of differences and publish them to Nucleus where they will then be forwarded to all subscribers.

Omniverse Nucleus offers a set of fundamental services that enables a variety of client applications, renderers, and microservices to share and modify representations of virtual worlds.

Nucleus operates under a publish/subscribe model. Subject to access controls, Omniverse clients can publish modifications to digital assets and virtual worlds to the Nucleus Database (DB) or subscribe to their changes. Changes are transmitted in real-time between connected applications. Digital assets can include geometry, lights, materials, textures and other data that describe virtual worlds and their evolution through time.

The fundamental representation of assets in Omniverse is Pixar’s open-source Universal Scene Description (USD). USD is much more than a file format, it is a rich scene representation with an API that enables complex property inheritance, instancing, layering, lazy loading and a wide variety of other key features. Omniverse uses USD for interchange through the Nucleus DB service.

Materials in Omniverse are represented by NVIDIA’s open-source MDL (Material Definition Library). NVIDIA has developed a custom schema in USD to represent material assignments and parameters allowing for easy interchange between different application-specific material definitions. This standard definition enables materials to look similar if not identical across multiple applications.

Omniverse Kit is a toolkit for building native Omniverse applications and microservices. It is built on a base framework that provides a wide variety of functionality through a set of light-weight extensions. These stand-alone extensions are plugins that are authored in Python or C++.

The kit is designed to be the premiere foundation for new Omniverse-connected tools and microservices. It can be run headless to create a microservice, or with a UI. The UI application can be fully written using the UI engine which enables it to be fully customized. The Omniverse UI system uses Dear Imgui while providing a rich Python and scripting experience unique to Omniverse Kit.

Simulation in Omniverse is provided by a collection of NVIDIA technologies as plug-ins or microservices to Omniverse Kit.

One of the first simulation tools to be distributed as part of Omniverse is NVIDIA’s open-source physical simulator PhysX, widely used in computer games. The objects that participate in the simulation, their properties, any constraints, and any solver parameters are specified in a custom USD schema. Kit provides features for editing the simulation set-up, starting and stopping it, and adjusting all the parameters.

Omniverse supports renderers compliant with Pixar’s Hydra architecture, one of which is the new Omniverse RTX viewport which exploits hardware RT cores in Turing and future-generation NVIDIA architectures to do real-time hardware-accelerated ray tracing and path-tracing.

The renderer does not rasterize before ray-tracing, which allows for very large scenes to be handled in real-time. It has two modes: traditional ray tracing for fast performance and path tracing for the highest quality results.

NVIDIA Omniverse can now connect to numerous content creation applications and NVIDIA has created “Experiences” to showcase its capabilities in different use cases. These Experiences are built using Omniverse Kit and although quite useful as they stand, they can serve as a starting point for developers to build upon and extend or create their own. These experiences are available as samples to technical artists and developers and will continually be gaining new features and capabilities.

More experiences are currently in development. As a development platform Omniverse is available on an Early Access basis from NVIDIA. If you would like to evaluate the Omniverse platform and help build the future of interoperable 3D graphics apply for early access at:

Ultimately, the goal of NVIDIA Omniverse is to deliver real-time collaboration for real-time creativity. Creating visual effects, architectural visualizations and manufacturing designs (among other tasks and workflows) will all benefit from the transformative framework Omniverse provides.