NVIDIA is positioning itself as the industry leader for accelerated computing, expanding beyond the GPU to sell new kinds of chips, products and solutions. NVIDIA revealed its plans at its virtual GTC 2021 event to become a three-chip company with a new Arm-based data center CPU that will debut in early 2023.

Offering a CPU is a strategic gambit for a company focused on GPUs for most of its 28-year history, but NVIDIA made its intentions of becoming a heterogeneous compute technology provider clear last year with its $7 billion acquisition of Mellanox Technologies, resulting in NVIDIA’s line of BlueField data processing units.

NVIDIA is moving beyond its component provider roots, is aggressively expanding and enhancing its line of DGX appliances and DGX SuperPOD clusters for AI and HPC, and is making major new enterprise software investments to become the world’s premiere next-generation data center vendor. And with NVIDIA Omniverse Enterprise, NVIDIA now has the world’s first technology platform that enables global 3D design teams working across multiple software suites to collaborate in real-time in a shared virtual space.

Here are the ‘must know’ product announcements NVIDIA made at GTC 21, ranging from it’s new data center CPU and BlueField-3 DPU to new DGX products and workstation and data center GPUs. 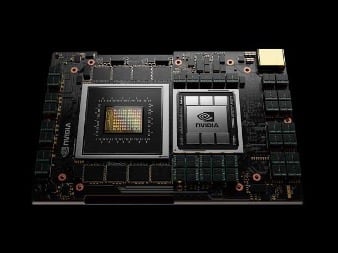 NVIDIA revealed an Arm-based data center CPU for AI and high-performance computing that will provide 10 times faster AI performance than than x86 CPUs for training giant NLP models.  The new data center CPU is named Grace after computer programming pioneer Grace Hopper, and it’s set for launch in early 2023. The CPU can deliver 900 GB/s of bi-directional bandwidth for CPU-to-GPU communication due to a next-generation NVIDIA NVLink interconnect that connects the Arm-based CPU and an Ampere GPU on Grace’s SOC (System-on-Chip) implementation. Grace will use next-generation Neoverse CPU cores from Arm alongside an LPDDR5x memory subsystem, which the company said will provide double the bandwidth and 10 times better energy efficiency than competing offerings. NVIDIA CEO Jensen Huang committed the company to having road maps for GPUs, DPUs and CPUs, with architecture updates happening every two years, one year putting emphasis on x86 platforms and the second on Arm architecture offerings.

NVIDIA also announced a new version of its DGX SuperPOD reference architecture for AI supercomputers that introduces BlueField-2 DPUs to improve security and optimize workload performance with new CPU offload support. The company is also expanding DGX SuperPOD capabilities with NVIDIA Base Command, a new solution for allowing multiple users to securely access, share and operate DGX servers, making it easier to provision and schedule workloads. NVIDIA also announced the availability of its NVIDIA DGX Station A100 through a subscription program, with prices starting at $9,000 per month. The new DGX SuperPODs and Base Command will be available in the second quarter of this year. Subscription-based DGX Station A100 systems are available now (from NVIDIA or PNY EMEAI, PNY NALA does not sell DGX systems in North America).

The NVIDIA RTX™ A6000 has company! New NVIDIA pro GPUs are the perfect way to upgrade existing desktop professional PCs or workstations. Here’s the scoop starting with a high-level positioning statement for each card, followed by market-specific information. 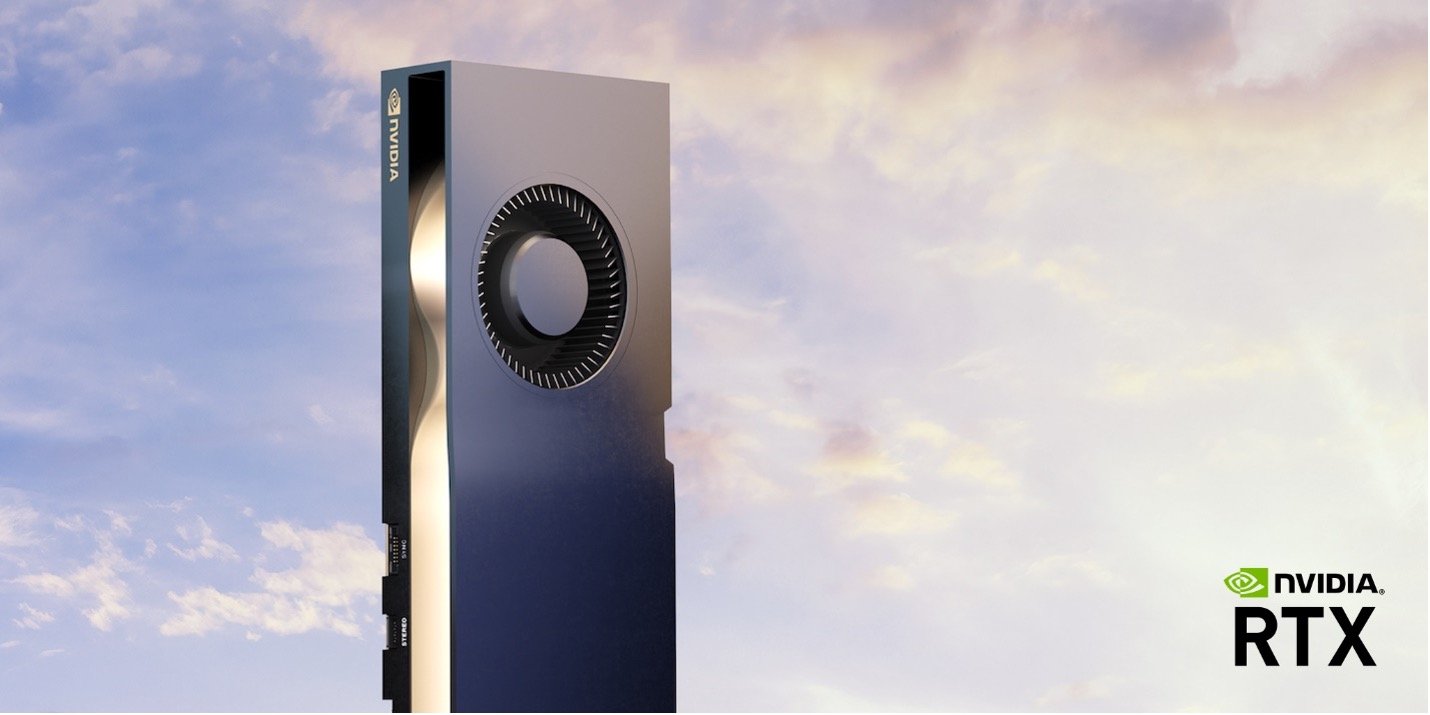 Spearhead innovation from your desktop with the NVIDIA RTX A5000 graphics card, the perfect balance of power, performance and reliability to tackle complex workflows. Built on the latest NVIDIA Ampere architecture and featuring 24 gigabytes (GB) of GPU memory, it’s everything designers, engineers, and artists need to realize their visions for the future.

The NVIDIA RTX A4000 is the most powerful single-slot GPU for professionals, delivering real-time ray tracing, AI-accelerated compute, and high-performance graphics to your desktop. Engineer next generation products, design cityscapes of the future, and create immersive entertainment experiences with a solution that fits into a wide range of systems so your customers can work without limits.

The exciting new NVIDIA RTX A5000 and RTX A4000 professional graphics boards are available to order now. If you have any questions or need additional information please contact your PNY Account manager, email gopny@pny.com, or visit www.pny.com/nvidia-rtx.

The NVIDIA A100 and A40 have been complemented with the NVIDIA A30, A16, and A10. Each of these new data center GPUs works with powerful NVIDIA vGPU solutions to bring the latest NVIDIA accelerated graphics, rendering, AI, and HPC capabilities to remote workers from secure data center infrastructure. Here’s a brief overview of the new products. 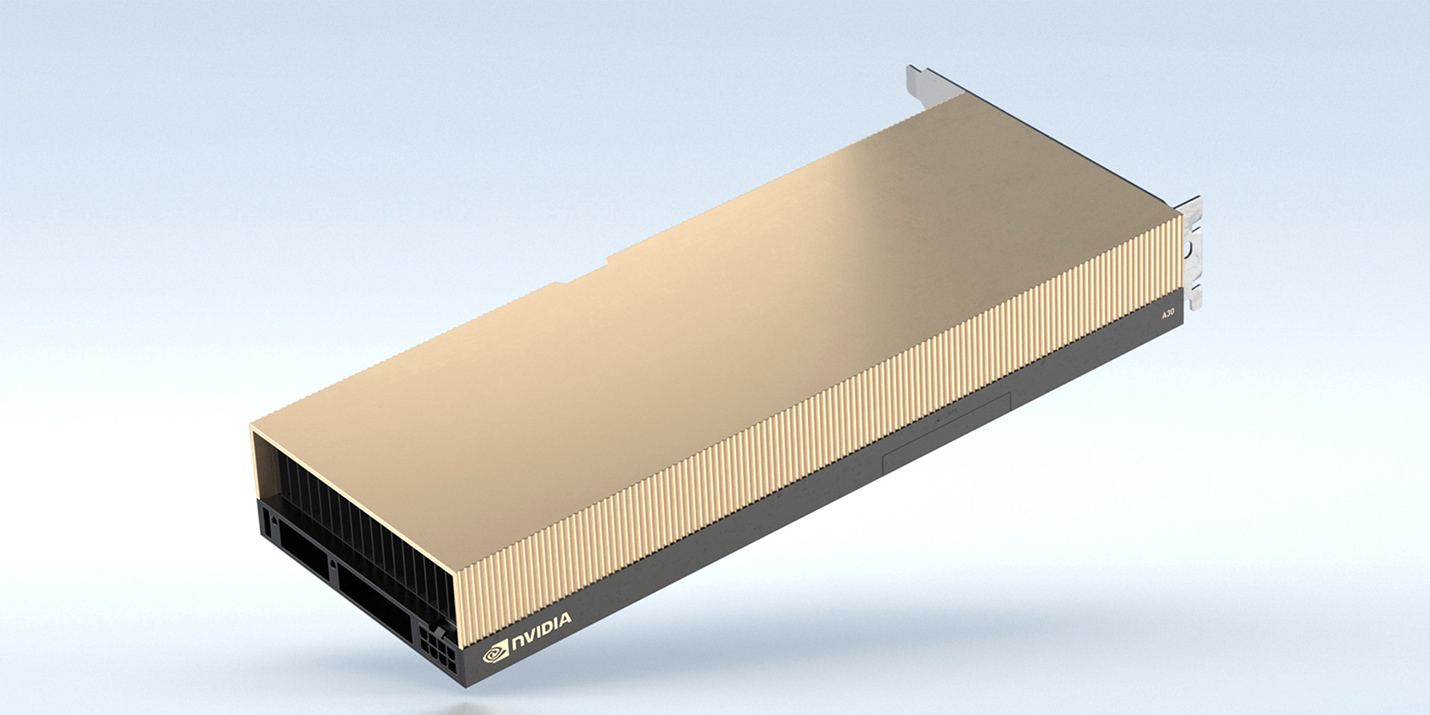 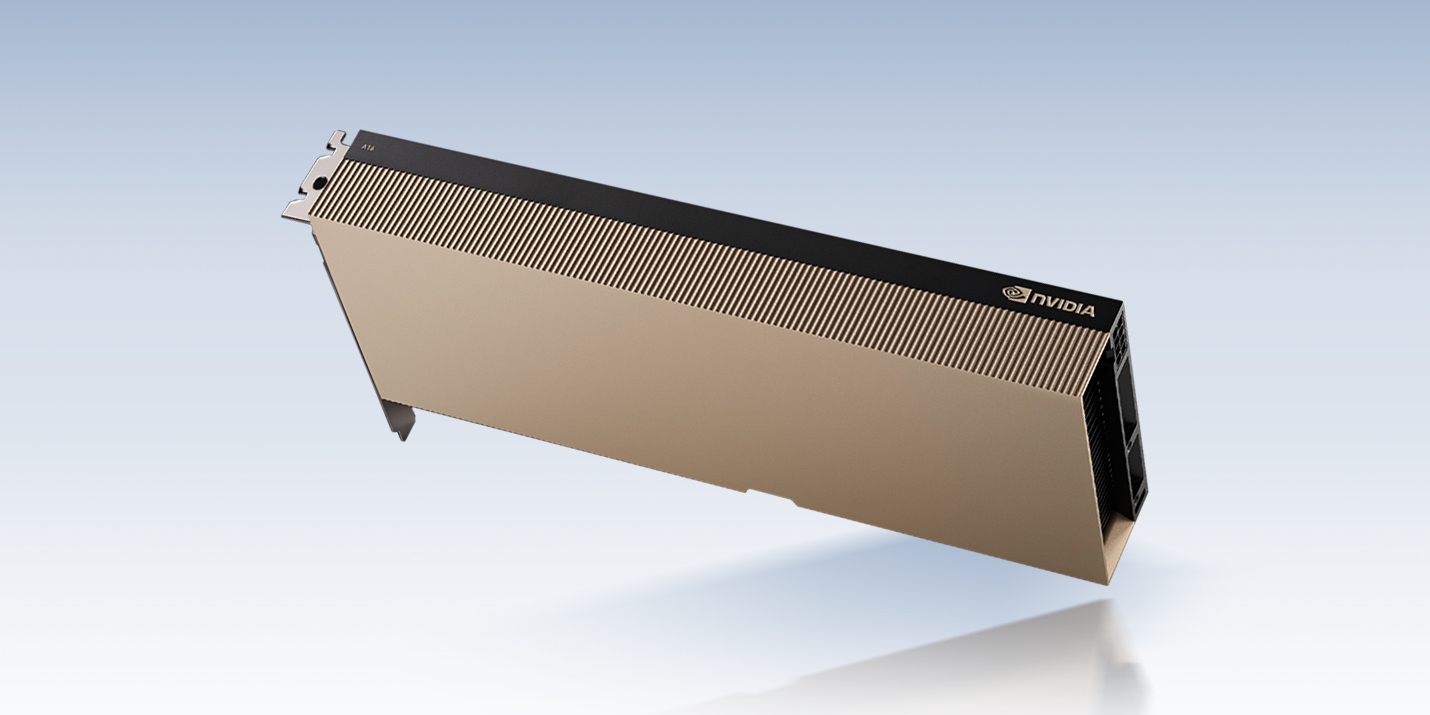 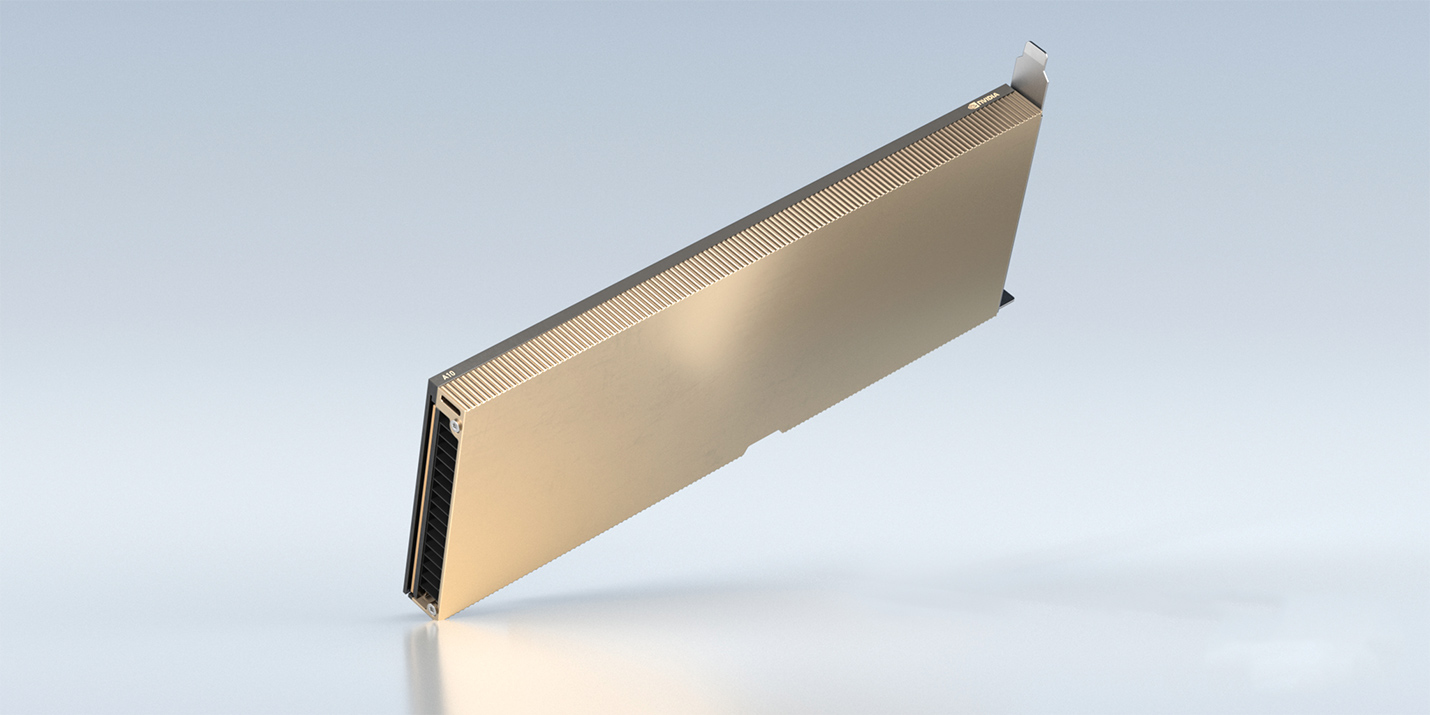 The NVIDIA A10 Tensor Core GPU combines with NVIDIA RTX Virtual Workstation (vWS) software to bring mainstream graphics and video with AI services to mainstream enterprise servers, delivering the solutions that designers, engineers, artists, and scientists need to meet today’s challenges. Built on the latest NVIDIA Ampere architecture, the A10 combines second-generation RT Cores, third-generation Tensor Cores, and new streaming microprocessors with 24 gigabytes (GB) of GDDR6 memory – all in a 150W power envelope – for versatile graphics, rendering, AI, and compute performance. From virtual workstations, accessible anywhere in the world, to render nodes to the data centers running a variety of workloads, A10 is built to deliver optimal performance in a single-wide, full-height, full-length PCIe form factor.

NVIDIA A10 is supported as part of NVIDIA-Certified Systems, in the on-prem data center, in the cloud, and at the edge. NVIDIA A10 builds on the rich ecosystem of AI frameworks from the NVIDIA NGC catalog, CUDA-X libraries, over 2.3 million developers, and over 1,800 GPU-optimized applications to help enterprises solve the most critical challenges in their business.

NVIDIA Omniverse – Creating a New Era of Collaboration and Simulation 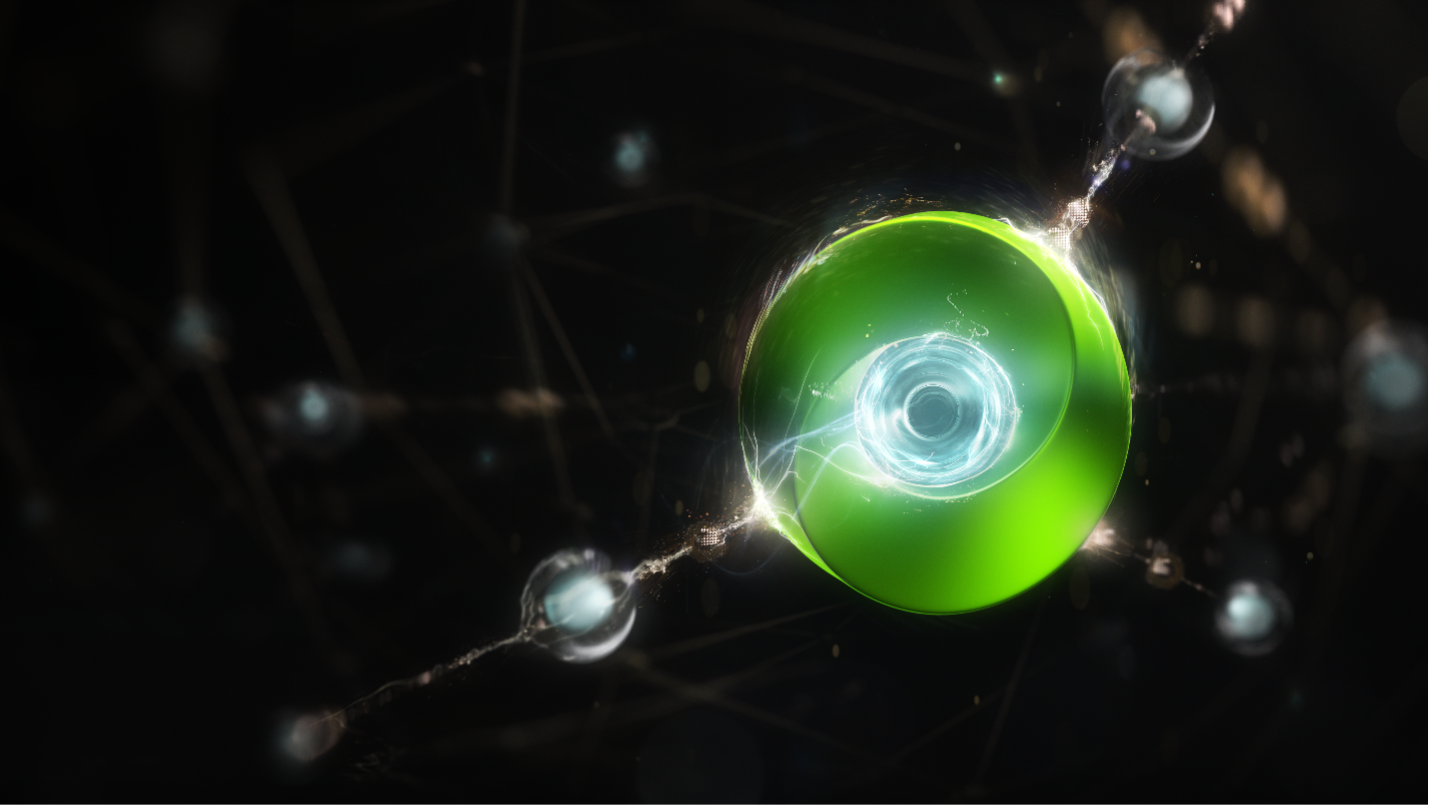 NVIDIA Omniverse Enterprise makes it possible for 3D production teams — which are often large, diverse in skills and geographically dispersed — to work seamlessly together on complex projects. Rather than requiring in-person meetings or exchanging and iterating on massive files, designers, artists and reviewers can work simultaneously in a virtual world from anywhere, on any device.

Omniverse Enterprise is tested and optimized for professionals to run on NVIDIA RTX laptops and desktops as well as NVIDIA-Certified Systems™ on the NVIDIA EGX™ platform. This makes it possible to deploy the tool across organizations of any scale, from small workgroups using local desktops and laptops, to globally distributed teams accessing the data center using various devices.

For the latest on Omniverse visit www.pny.com/omniverse

With over 1,500 sessions, many by industry and technology thought leaders from NVIDIA and other leading companies, universities, research institutions, and ISVs, this blog barely scratches the surface of the rich technological and solutions tapestry presented AT GTC 21 – and the insights and opportunities to learn are far from over. Visit the GTC on Demand site at 722 sessions and counting, to keep the flame of innovation, creation, and realization of your life’s best work alive!

For more information on GTC and to watch the must-see GTC 21 Keynote, full of exciting announcements with NVIDIA CEO and Founder Jensen Huang, visit www.pny.com/gtc