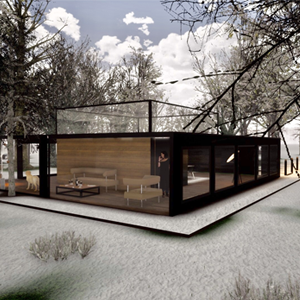 What GPU were you using in your studio prior to winning the NVIDIA Quadro P4000? What system did you install the P4000 in and what applications are you primarily running?

We were working with an Intel solution on a HP Z2 mini, we have installed the NVIDIA Quadro P4000 in a Sonnet eGFX external GPU enclosure solution, which allows use with different computers across the studio.

How will the P4000 benefit your workflow?  What advantages does it bring to your studio?

Our workflow has been considerably accelerated; we no longer have time to take coffees during our renderings ;-) The advantage is that we can now reach another level in both our architectural competitions and client satisfaction.

The first project you completed using the Quadro GPU was the Contain Air Home project.  Can you tell us about this project and the benefits you experienced using the P4000?

The Contain Air Home was a project to design a residential home for a family and community in upstate New York.  The P4000 gave us access to new 3D rendering and VR solutions like TwinMotion, which enables us to get hyper-realistic rendering and Virtual Reality immersion with an HMD (head-mounted display).

Do you have other exciting projects coming up that you will be using the P4000 for?

As mentioned, we have installed the NVIDIA Quadro P4000 in an eGPU enclosure, an excellent solution for today’s design studios.

Established in 2007, SCHARLY DESIGNER STUDIO is an award winning Boutique Design Studio based in New York that brings Modern + Contemporary Design with Civic Engagement to its projects.