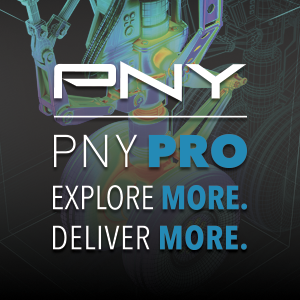 Bring optimal designs to market faster with the NVIDIA Quadro GP100 — the ultimate solution for the most sophisticated CAE workflows in design and manufacturing.

TEN TECH LLC benchmarks the latest Abaqus 2017 with the NVIDIA Quadro GP100 which it describes as “a hybrid monster half-GPU half-accelerator. Best of both worlds for sure”. TEN TECH LLC’s analysis includes a typical turbine pressure and temperature non-linear statics analysis using the model of a jet engine turbine.

Live Webinar: Accelerate Your Workflow - Upgrade to the Power of Pascal

UPGRADE TO THE POWER OF NVIDIA QUADRO PASCAL

Does your work involve creating, rendering, or visualizing data and images? Heavy computation? Is hardware reliability important? Then this webinar is for you.

Learn how upgrading to the exciting new NVIDIA Quadro professional graphics solutions, powered by NVIDIA's Pascal™ GPU architecture will save you time, make you more money and allow you to be more competitive.

SNEAK PREVIEW: See what PNY is showing at GTC 2017

Billed as the largest and most important event of the year for GPU developers, the GPU Technology Conference (GTC) showcases the most vital work in the computing industry today – including artificial intelligence and deep learning, healthcare, virtual reality, accelerated analytics, and self-driving cars. PNY is proud to be a sponsor of GTC 2017, and will be demonstrating the new family of Quadro Pascal™-based professional GPU solutions including: the Quadro GP100, Visual Computing Appliance (VCA) featuring eight ultra-high-end Quadro P6000 GPUs and Quadro Embedded solutions.